I wrote this tool many years ago, and I does what I needed it to do at the time. The first version was the second useful program I'd ever written — and it shows.

If you are looking for something simple to include common content in your pages, then Dolt might be for you, but I keep this page live mostly for historical interest.

These days I tend to use Template Toolkit, and inject content into it using Perl, but it comes with tpage and ttree which don't require you to do any programming. Ttree supports exciting concepts missing from dolt, such as directories!

The dolt is a cross platform HTML preprocessor, it is used to replace specially formatted HTML comments with the contents of another file. This lets you, for example, have the same menu on every page and update it by changing just one file. The dolt gives you the main benefit of frames but without the vast number of problems

The dolt processes files before they are uploaded to a web server. If you can install software on the computer you sit at to write web pages you can use the dolt.

It is only fair to point out that The Dolt is a very primitive tool, it can only cope with a flat directory structure, any files that it is to process must be targeted to be in a single directory, with no subdirectories. Unprocessed files can be placed in subdirectories.

The web server needs the ability to serve static html pages, this is what web servers are for and all web servers will do this.

Because this message doesn't seem to make it through, I'll repeat: You do not need to be able to run cgi scripts on your server.. Not!

The dolt is a Perl script, before you can use it you need a (free) Perl interpreter installed on your system. Linux and other *NIX users probably have one installed already. Microsoft Windows users can download a free Perl interpreter from ActiveState.

The dolt is published under the GNU General Public License. You can download it from my github. Rename it from dolt.plx to dolt.pl.

You need separate directories for your source files and generated files. You may find it helpful to keep your include files separate from your HTML source files. This image shows a sample directory structure, each box contains three lines:

You can find a screenshot of dolt in action (under Windows) below. You should be able to work out how to use it from that if these instructions aren't clear enough. Note that the console window displayed is command.com, not the Perl shell included with ActivePerl. 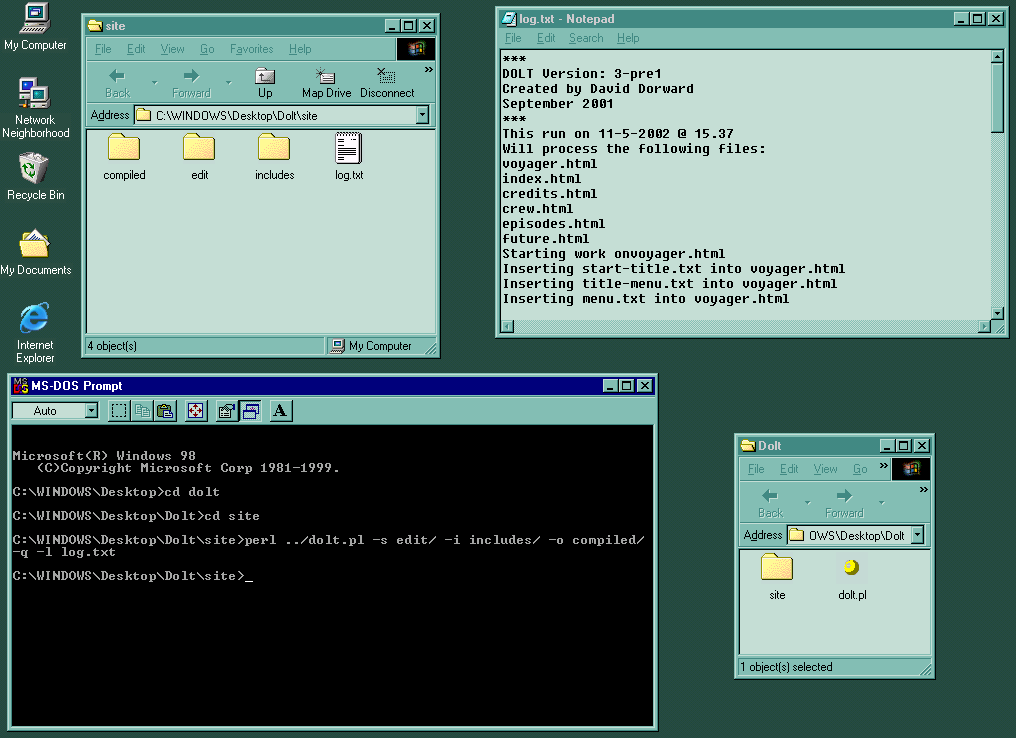 It will not copy that line, but instead look in the Include Files directory for a file of that name, it will then insert the contents of that file instead of the comment.

So any content you want to appear on multiple pages (such as a menu) should be placed in a separate file in the Include Files directory, and called with <!--* filename.txt *--> on a line by itself. The format of the command is designed to be treated as a comment by any syntax highlighting HTML editors you may use, and therefore not cause errors to be displayed which would vanish upon running the dolt.

Issue the command perl dolt.pl, unless you renamed it, and you will get the following summary of commands:

The majority of people who have problems with dolt, do so because they don't know how to issue the command properly. You need to do it at the command prompt, in Windows this is done by running (Start > Run) either command or cmd (depending on the version of Windows).

I wanted to make sure this program is bug free and as easy to use as possible but, as mentioned at the top of the page, have abandoned it in favour of much better software. If you have a problem, then I recommend you use template-toolkit instead.